DRAWING FOR "THE CLAN" SERIES! 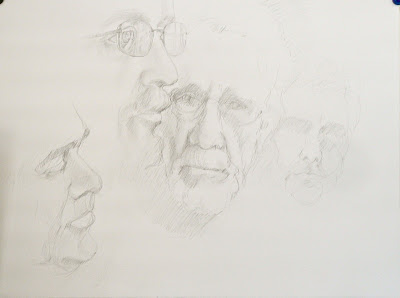 This is the first step in a new process for me.  A detailed graphite pencil drawing.  It will get painted on top of but I thought this would be a good place to post this step.   These are the men in my life....my husband and three sons.  It is going to take me awhile to get the scale of the various heads in the proper proportion for the depth to read properly.  Darn if I didn't make my husband's head a tad too large.  I need to get out the tracing paper and make some corrections.  Then I will have it right, permanently!

Having multiple gesture drawings on the same page provides an opportunity to find some abstract compositions by tight cropping.  Using an empty slide holder as a viewfinder, I am sure there are some paintings waiting to be discovered!

A brush pen with real or synthetic hair (as opposed to a felt tip) is a wonderfully fluid drawing instrument.  It takes some practice to get a variety of line from it but a joy to draw with.  Here I combined two poses into one composition.  A little weird but fun.
I have combined two poses again and added a little diluted ink wash and a bit of charcoal to the brush pen.


As I work, I like to try different combinations of materials to see what works best. Here I started with the ink wash without line, laying in the shapes of the black leotard and adding the ink line last.  Walnut ink wash with black ink brush pen.

MUSIC IN THE PARK 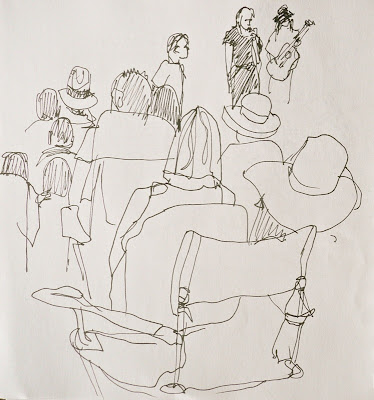 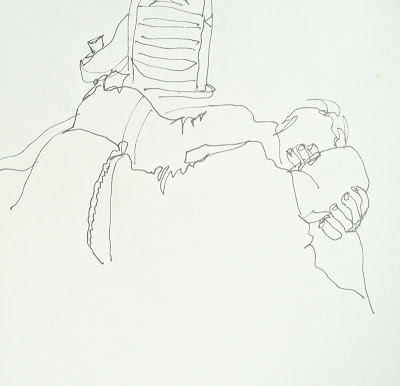 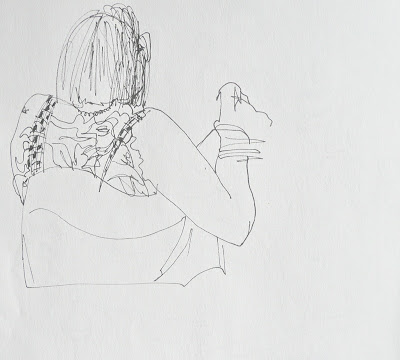 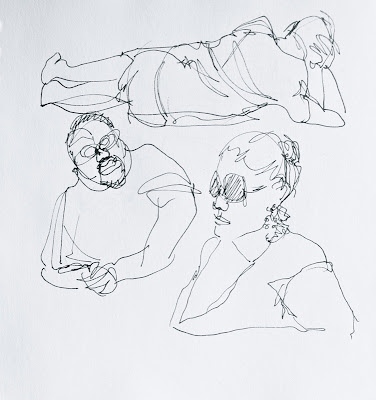 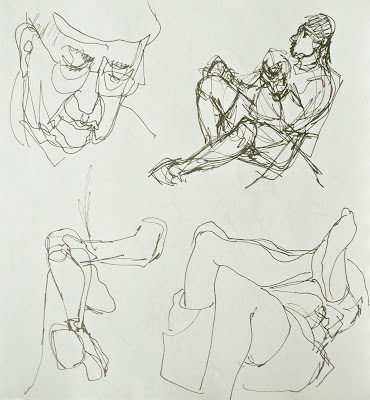 We went to a wonderful concert in San Mateo's Central Park last night with a group of friends.  It was a gorgeous balmy evening and everyone was having a picnic supper while lounging on the grass or sitting in portable chairs.  Some even had low tables with cloths!  I had decided to do some sketching and painting.  When I pulled out my supplies, the tin with the paint brushes was missing (still sitting on my desk).  I had brought my iPad and the light was such that I could easily see the screen but the battery was too low!  How aggravating.  Still, I had my pen and sketch paper so I had fun sketching while enjoying the lively music.  At the intermission I decided to turn my chair around as I was tired of drawing the backs of people's heads.  I can't wait for the next concert!

Posted by Myrna Wacknov at 9:21 AM No comments: 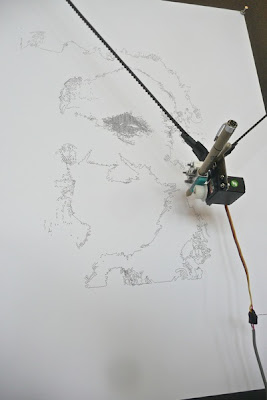 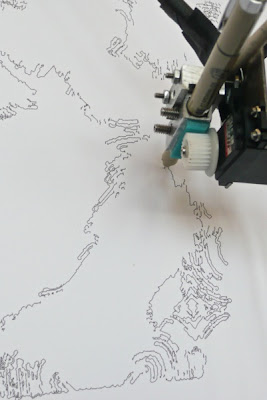 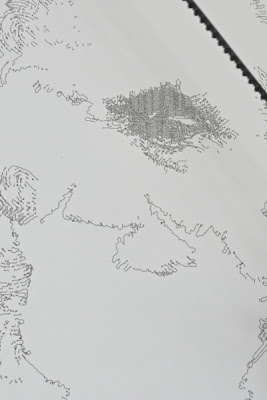 Today we went to the county fair grounds to an event called "The Maker's Faire"  Creativity, ingenuity, technology and individuality were everywhere!  This is becoming an annual event with a huge turnout.  My husband and I were like rubes in the big city with all the high tech displays.  The images above were created by a computerized robotic arm that held a micron pen and drew from a photo image in the computer.  It was fun to watch and I was struck how interesting the image was with just selective lines and areas of more detail along with lots of white space.  Of course, it would all be filled in with time, but I really liked the minimal image.  This is the ultimate "contour drawing".
In another booth, there was a fine pen like stylus that you could draw with directly on the computer monitor (not a separate pad that displayed your marks on the monitor).  I asked if it would work on an iPad.  Sadly, the answer was no.  This pen worked with magnet technology and the iPad uses a different technology.  Right now, I have the best stylus available for the iPad.
Posted by Myrna Wacknov at 8:23 PM 2 comments:

IT'S ALL IN THE DETAILS! 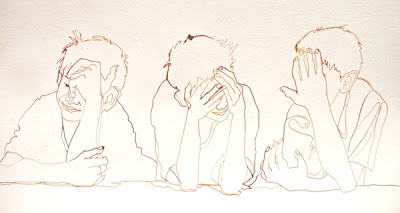 I didn't realize how washed out this image is!  Here is a detail of my latest painting which starts with an acrylic ink line drawing done with a fine nib dip pen on a very smooth gesso surface.  This is just 3 of the 5 figures in the piece.  I was able to get excellent detail with the dip pen but not much variation of line width.  Fortunately, I did get some variation in the depth of color.  Burnt Sienna is a nice choice for the line work as it isn't harsh like black but holds its own in a painting.  Check out my other blog to see the painting progress.
Posted by Myrna Wacknov at 11:16 PM 2 comments: 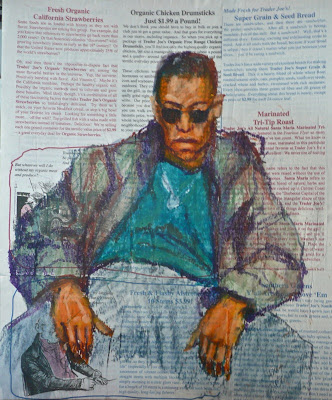 I was at the Sunnyvale Art Gallery where there is a fabulous exhibit of high school children's art work.  This is a very large gallery with tons of space, so there was a lot of work displayed, including ceramic pieces and other 3 dimensional things.  The work is so original and creative.  I think part of the reason is these kids are given challenging projects and concepts.  They aren't just copying photographs.  There should be a website that lists interesting challenges.  Maybe there is.  If someone knows of such a site, please pass it on.
There were a number of figurative images done with oil pastel on newspaper.  I loved the look, so I decided to try it myself.  I have these very creamy water soluble oil pastels called "Portfolio" which are available at Staples and very inexpensive but fun to work with.   This was a lot of fun.  I think I will do more in the future.
Posted by Myrna Wacknov at 6:33 PM 5 comments: 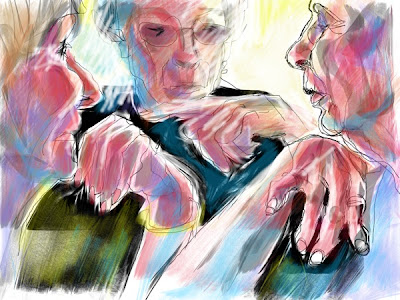 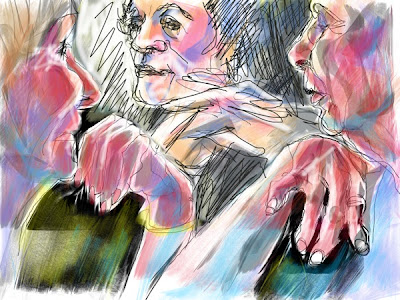 While sitting at Gallery Concord I decided to try the iPad Sketch Club app. to create some thumbnail composition sketches.  I was able to save the first sketch, sending it to myself through e-mail then I erased the middle figure and tried a different image.  This is a great way to try out a number of different ideas without having to redraw everything.  I am also practicing using color with this program.  Trickier than gray scale values.
Posted by Myrna Wacknov at 9:35 PM 2 comments:

Myrna Wacknov
A practicing artist and workshop instructor specializing in figurative and portrait character studies. I am a lifetime student of art and love to share what I discover with others. My art is on my website at www.myrnawacknov.com my blog site "Creativity Journey" and my blog site "Drawn to the Mirror"

Visit my other blogs